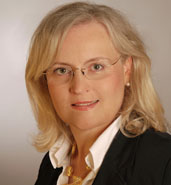 Area of Expertise
Publisher “Sustainable Finance: Rating instead of rates”

Curriculum Vitae
Dr. Heidrun Kopp MBA MA. After studies in Vienna, London and the USA in the banking sector, especially for the region of Central and Eastern Europe. Since 2008, the focus of work in CSR & Sustainability. The integration of CSR into the core business and the importance of sustainability ratings were presented in numerous expert panels, lectures, and publications to the public. Special personal commitment to the improvement of basic financial knowledge, especially in adolescents with and without a migration background.

Central and Eastern Europe (CEE) is a region made up of various countries. A statement made for one country is not necessarily true for another one. Corporate Social Responsibility (CSR), therefore, has to be translated to serve local requirements and expectations. The political, economic, historical and cultural background of society all have an impact on these requirements. The socialist-communist era after World War II has shaped the mindset of society and subsequently built the base for the outstanding economic growth of the region after the fall of the Iron Curtain. Foreign direct investment plays a major role in this context. The decision of foreign companies to do business in CEE is based on various advantages of location for example, the tax regime, but also on social and environmental legislation. What is a modern corporation’s current understanding of its social and environmental responsibility? Why is it attractive to corporates to take CSR seriously: as an additional risk measure, as an innovative approach to deal with future economic and societal requirements or purely as green branding? In any of these cases, CEE has a unique opportunity to learn from CSR-relevant initiatives active in developed countries, and to present itself as a relevant socio-ecological global player.