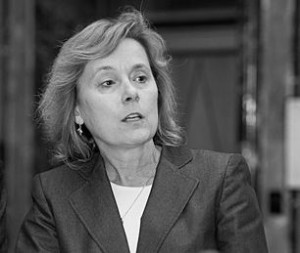 Definition Responsible Investment Banking
Responsible investment and banking starts with the willingness to explore and assess business operations’ impacts on the society, followed by deliberate principle-led action to mitigate and prevent human rights infringements. It requires a change in perspective from business risks only to stakeholders’ interests and rights.

Curriculum Vitae
Christine Kaufmann has been a professor for international and constitutional law at the Uni-versity of Zurich, Switzerland since 2002. In 2012 she was elected vice dean of the law school.
After completing her doctoral thesis on the Right to Food Christine Kaufmann served first in the legal department and then as Director of Human Resources at the Swiss Central Bank from 1991 to 2000. From 2000 to 2001 she was a visiting scholar at the University of Michigan Law School and worked on her habilitation project on the topic of Globalisation and Core Labour Rights. From 2001 to 2002 she served as Director of Legal Research at the World Trade Institute (WTI) at the University of Bern, where until 2012 she was the Co-Director of the NCCR Research Project Trade Regulation and is still a Member of the Board. From 2004 to 2012 Christine Kaufmann was a member of the Bar Association Examination Panel of the Canton (State) of Zurich.
In 2009, she initiated the foundation of the Centre for Human Rights Studies at the University of Zurich, which she now chairs. The Centre is a member of the Swiss Centre of Expertise in Human Rights (SCHR), where she is the co-leader of the cluster “Human Rights and Business” together with Prof. Hans-Peter Wehrli. In 2013 she was appointed co-president of the newly set-up Federal Advisory Committee of the National Contact Point for the OECD Guidelines for Multinational Enterprises together with State Secretary, Marie-Gabrielle Ineichen-Fleisch.
Her main research interests include the linkages between human rights and other areas of law, such as trade and economic law, whereby she mainly focusses on the responsibilities of corporations with regard to human rights.